The Oregon coast is eerily beautiful, and unlike any other coastline in the world. Capes and coves offer visitors tranquility today, but 70 to 40 million years ago the scene was much different. Frequented by volcanic eruptions, basaltic lava rolled down volcano flanks and traveled to the shore, creating the resistant, midnight, pillow basalt shoreline that distinguishes much of the Oregon coastline.

We began our journey by spending a couple hours at the Tillamook Cheese Factory in Oregon tradition– the free samples of cheese are worth it alone, but the marionberry ice cream cone I had was heavenly. After we overcame a dairy induced food coma we explored Garibaldi, where I grew up meandering around the fishing docks and rugged coast with my great grandfather, who owned a deep sea fishing trowel, the Lady C. That night we slept on forest service land in Tillamook National Forest, where the fuchsia foxgloves lulled us to sleep. 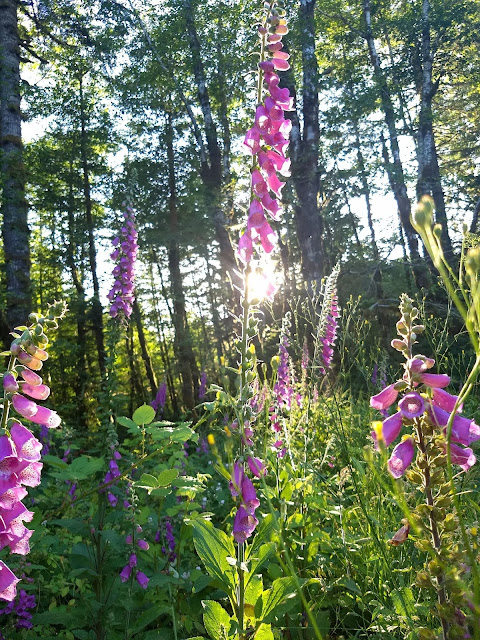 In the morning we were greeted by the deep forest hum of mossy hemlock and birch— I believe Oregon is the only state where you can find any and all shades of green in the forest. We headed down the hill, and set out for Cape Meares. This was one of my favorite beaches we explored, marked by 50 million year old basalt headlands, and shark-fin like islands on the horizon enveloped in fog. 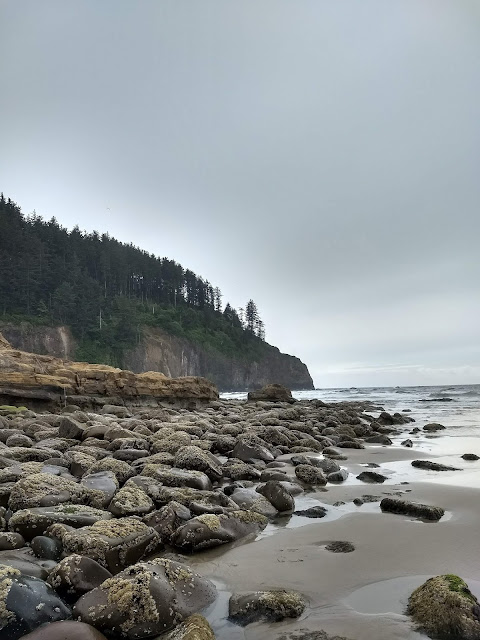 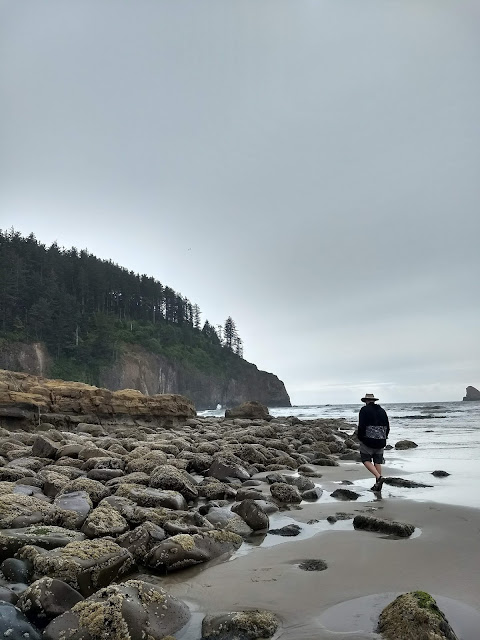 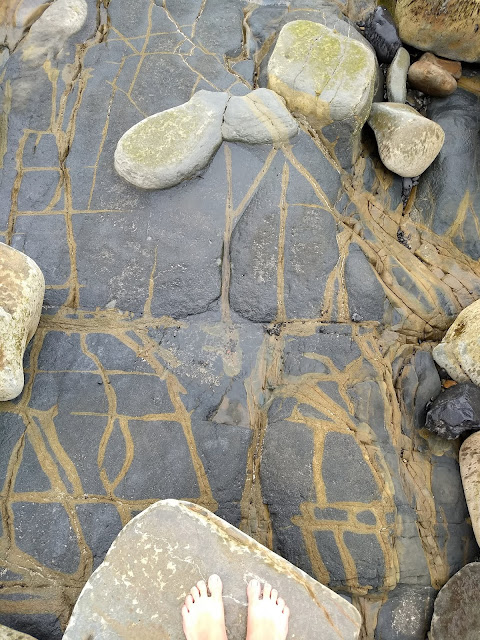 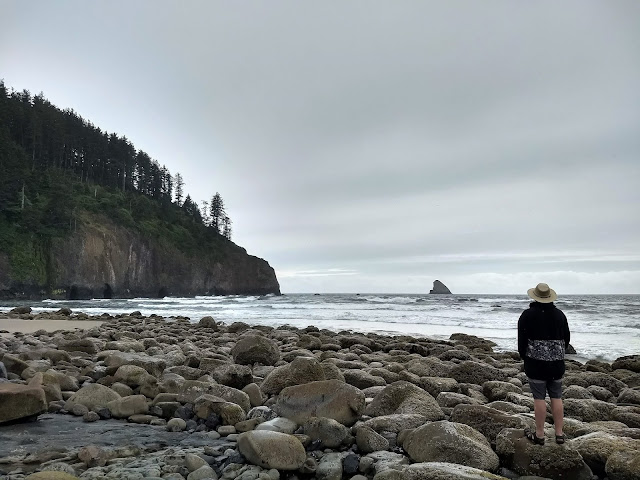 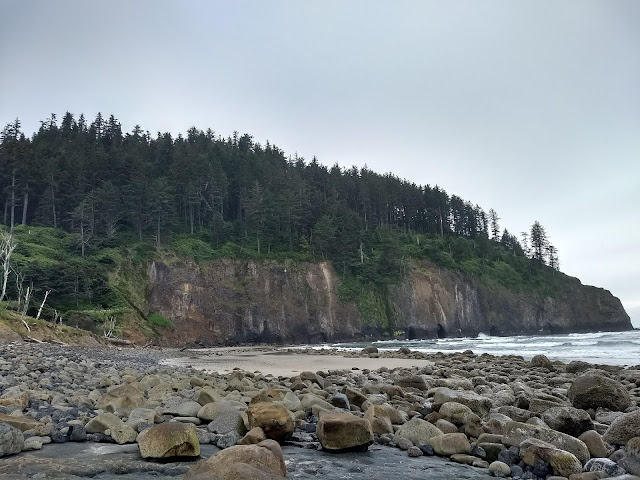 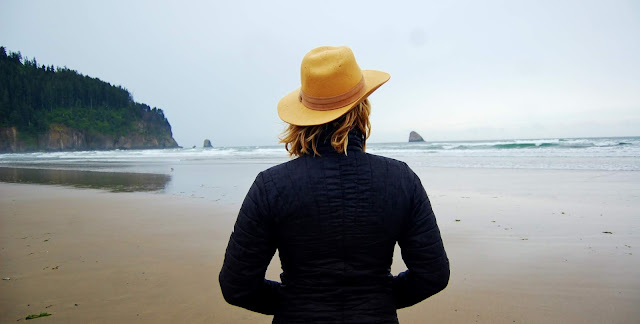 As we headed south the dramatic volcanic coves faded into the fog and transformed into broad windswept beaches. Tierra del Mar, just north of Pacific City, is an amazing beach banded by sand dunes, and one of the only pieces of coast in the pacific northwest you can drive up onto, at your own risk! We tested Dewey's all weather tires out on the sand, and after a few donuts deemed them sufficient. We parked as close to the water as we could, and set up shop. Soup on our Coleman Stove was on the menu, and we drank boxed wine out of our camp cups.

The clouds turned pink and periwinkle; the film of water left behind from low tide shone like a mirror to the sky. Wispy left overs turned grey and deep purple, then the sun disappeared behind them; the final show were hot pink sun bursts through the haze. After dinner we stood in awe as the moon rose up east behind the forested hills, the golden-orange glow so bright it demanded our attention. But, as we stood entranced, the tide rose. 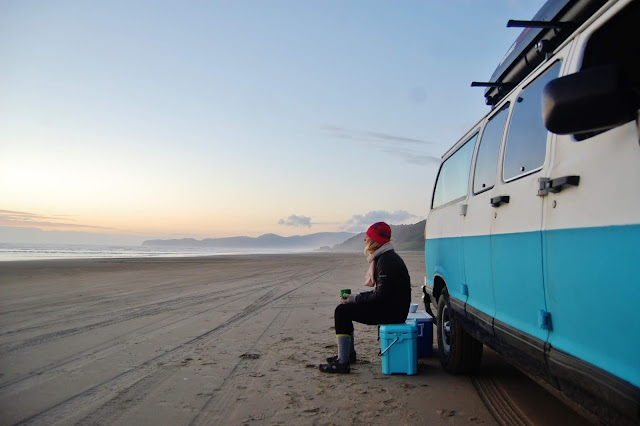 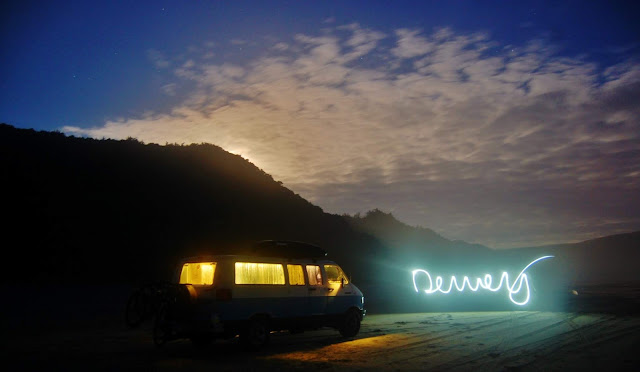 Camping isn't allowed at Tierra del Mar, so we figured it was time to get on the road and find a place to call home for the night. But, when we accelerated, the wheels made a too-familiar grrrr sound. We were stuck. But, just as the panicky-pit in stomach feeling sunk in, two local kids, Brandon and Timber pulled up in a lifted truck and asked, "you stuck?"

It was kismet. Brandon, the driver, explained he had just been let go from his construction gig, so to make ends meet, and to keep himself entertained, he took chains out to this beach to find people like us, who needed a tow out. He didn't ask for anything, but I gave him $7, which was all I had. He attached his chains to our grill and pulled. We had almost escaped, but as we were only 10 feet away from an exit - the wheels started spinning again. Luckily Brandon and Timber were still around - they yanked us out a second time, and this time we were able to drive off the beach.

The next morning we started our day at the Grateful Bread Bakery in Pacific City, and had the best scones I've ever eaten. Even if you don't think you're a scone person, go here, and you're world will be turned upside down.

Once the coffee took a hold, we hopped back on the road. We stopped at a beach in Newskowin where once resistant shore line had receded, but left a couple of forested volcanic islands that looked like bonzai tree arangements and an elk pranced down the beach. Just south of there, we pulled off at a viewpoint, with no plan in mind, and read about the Cascade Head Nature Reserve on one of the old yellow plastic information boards (good things come to those who read). We had never heard of the area, and it sounded beautiful so we decided to head there.

The Cascade Head Trail started out along the road, then led into forest. Once the climb began it didn't cease until the end of the trail. Salmon berry brush encroached in on the trail, creating a canopy above us. Black bears love these juicy, sweet and lightly tart berries and now I understand why. Their color when ripe ranges from royal purple, to orange pink, to golden. If soft, but not rotting, they are ready to eat. Another foraging opportunity presented itself on the trail; fern fiddleheads. In grocery stores, these nutrient packed-delicious-green sprials go for upwards of 18 dollars a pound. When we took this hike it was late June, ferns are still un-curling, reaching for sprinkles of sunlight through canopy. We ate a couple of fiddles and they have a delicious nutty-earthen asparagus like flavor.

The views after emerging from the forest are extraordinary and epitomize the diversity of the Oregon coastline. To the south white sand stands in stark contrast to turquoise waters, a scene reminiscent of Hawaii beaches. To the north, a volcanic cove was held between two grassy marine terraces. As we stopped to take in the first viewpoint, three amazing things happened in synchronicity; a juvenile grey whale breached and spouted blue water from his spout, a bald eagle circled overhead, and a baby elk grazed with his herd on the terrace. 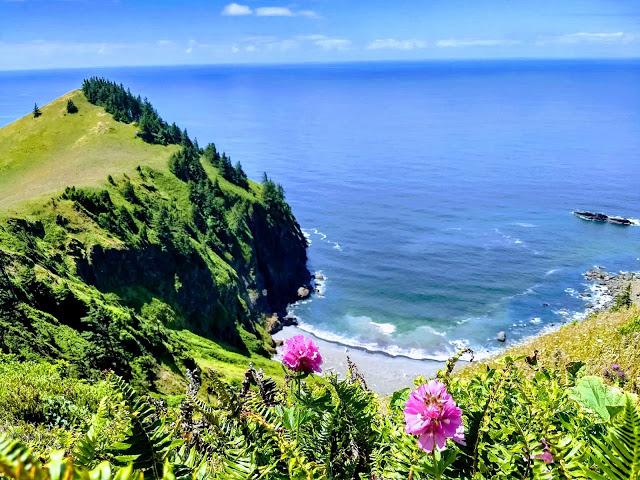 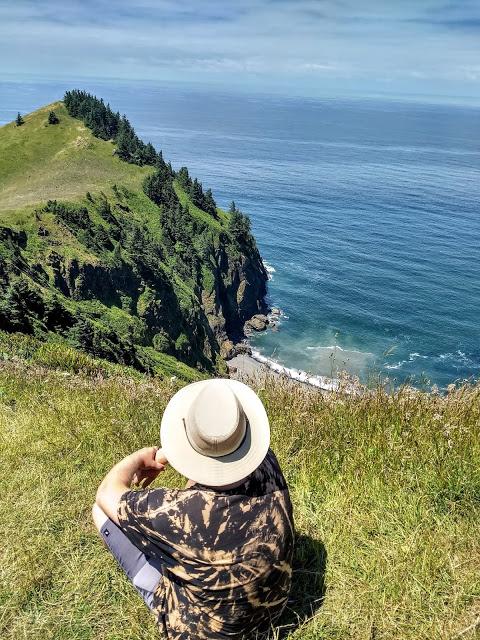 After a quick rest, we kept climbing up. Grassy prairie full of wild purple and golden wheat, indigo pea plant, and periwinkle weed accompanied us. A black, white and red banded garter snake slithered across the path as we crested the hill. Elevation gain on this hike is 1,310 feet, so when we reached the final viewpoint our legs were definitely feeling it a bit! If you keep walking on past the view, the trail will lead you to a beautiful-fairy-tail forest full of ferns, Sitka Spruce, and Western Hemlock where you can cool off. 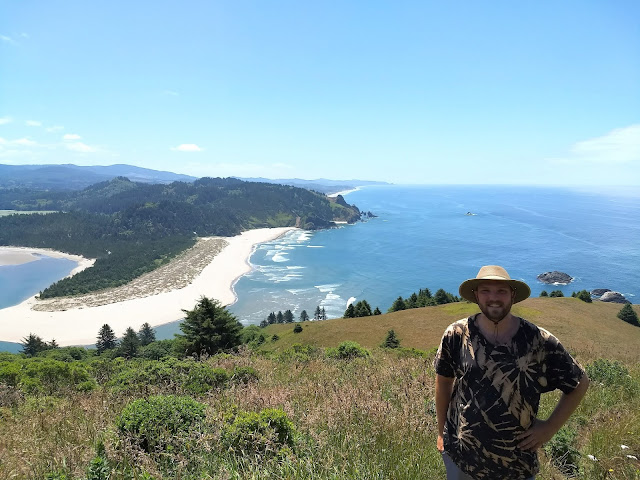 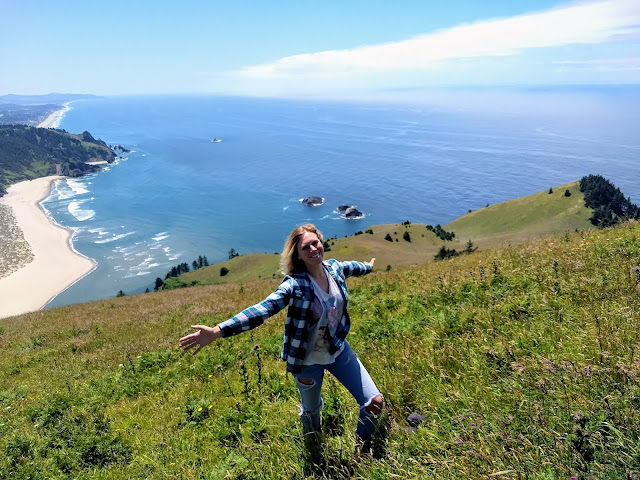 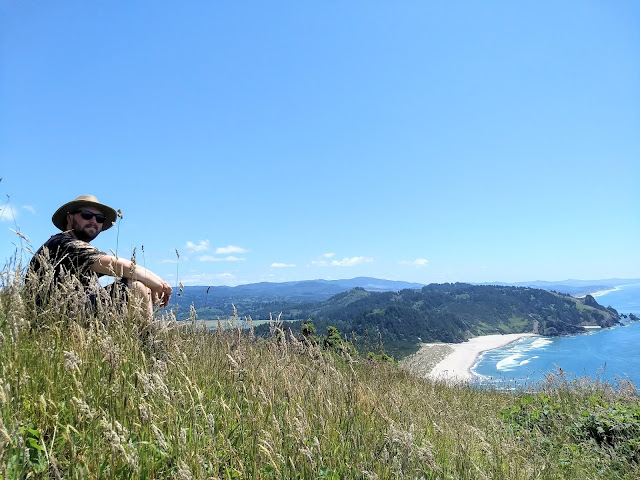 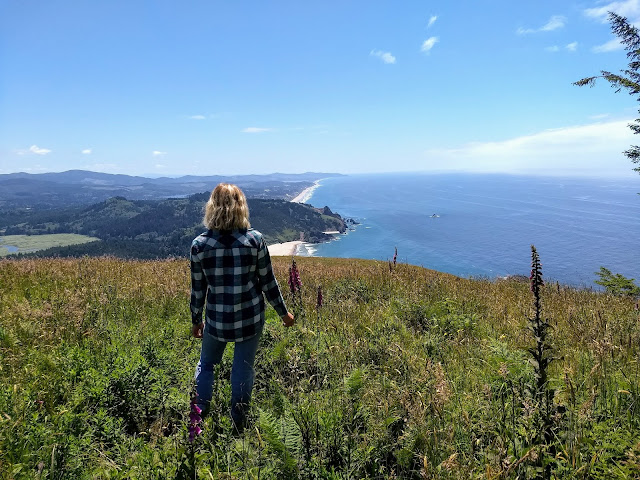 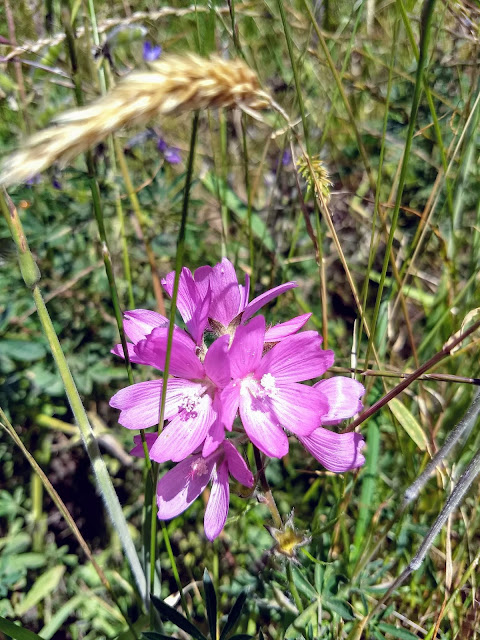 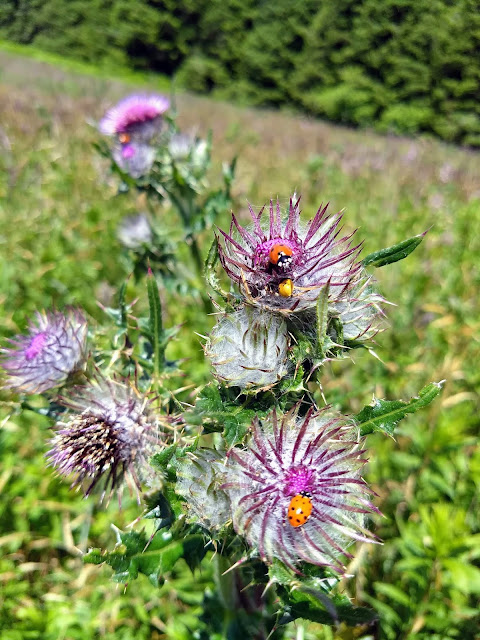 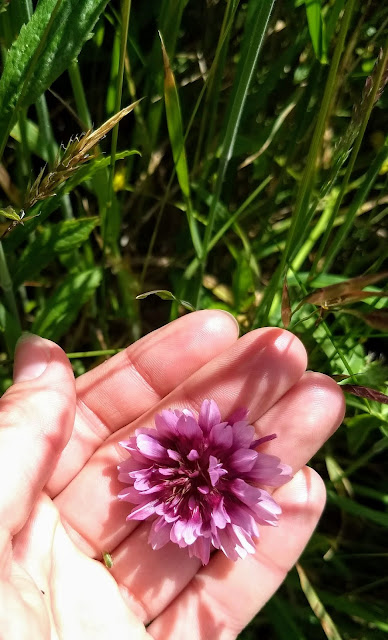 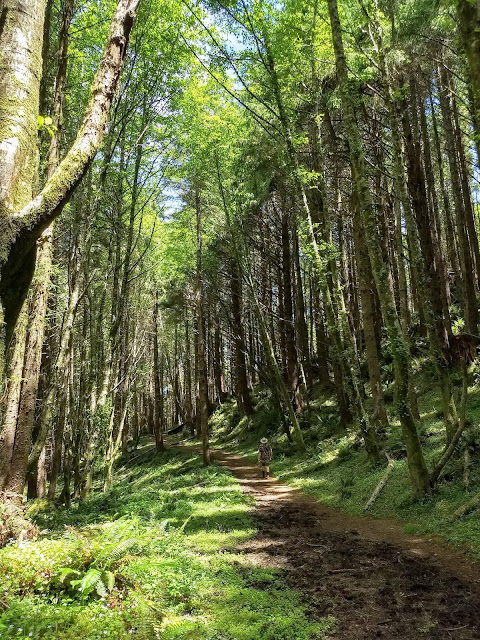 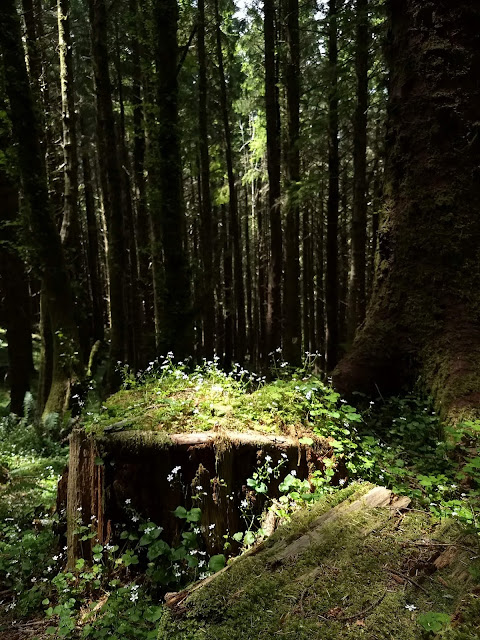 The lower trail was closed for restoration, or we may have spent all day wandering around the reserve. We trodded back down the hill to our van and got back on the 101. We stopped off at Cape Perpetua Overlook which gave us a birds eye view of the surrounding coast and woods. 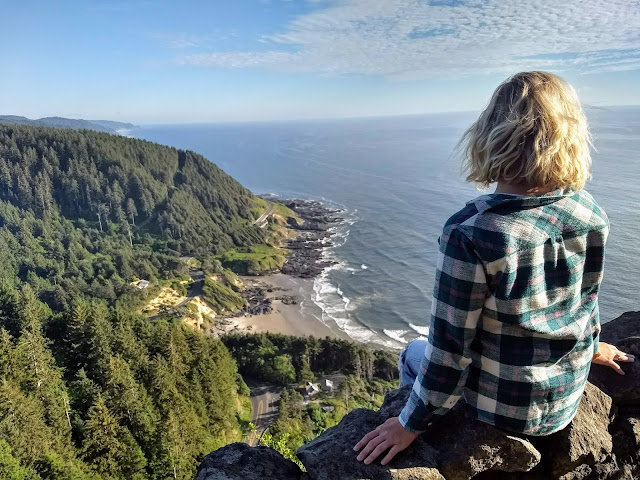 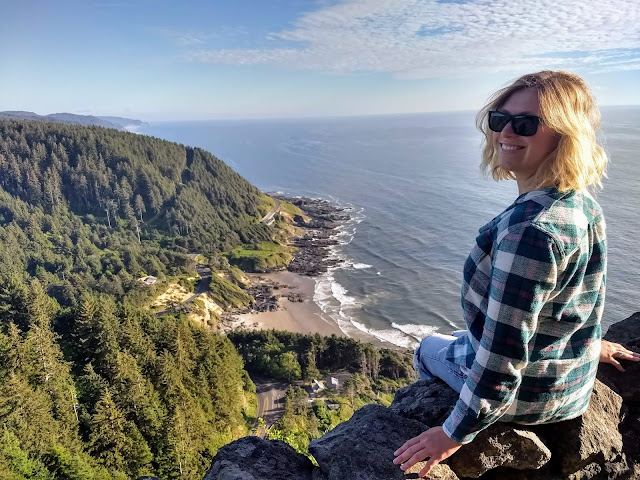 A can't miss of the coast is Heceta-Head Lighthouse. Just north of Florence, the mesmerizing crystal egg-like lighthouse looks like a titanic diamond on display in a museum. We took in the sunset there entranced by the brilliant rainbow refraction of light. 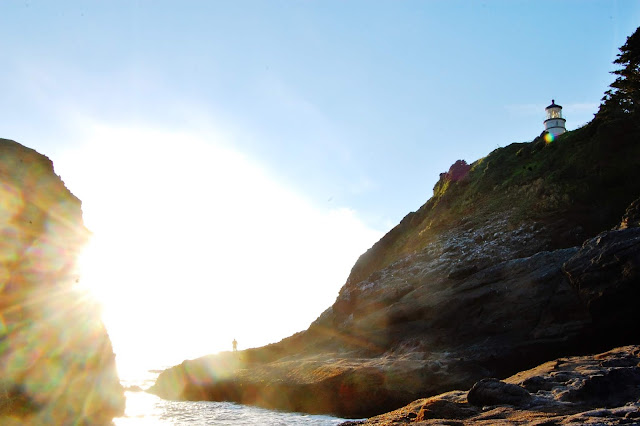 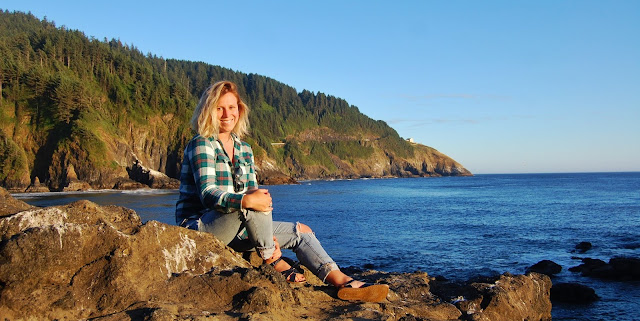 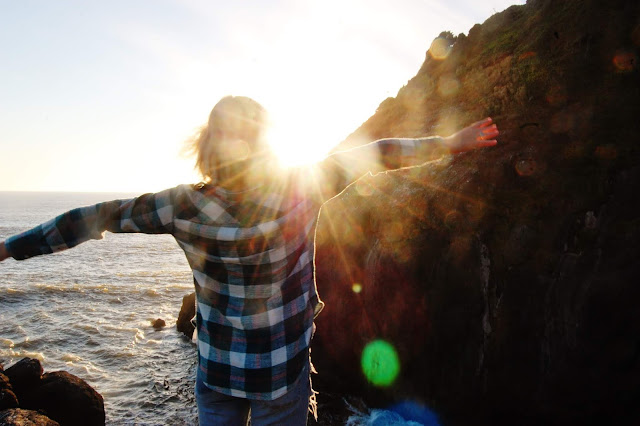 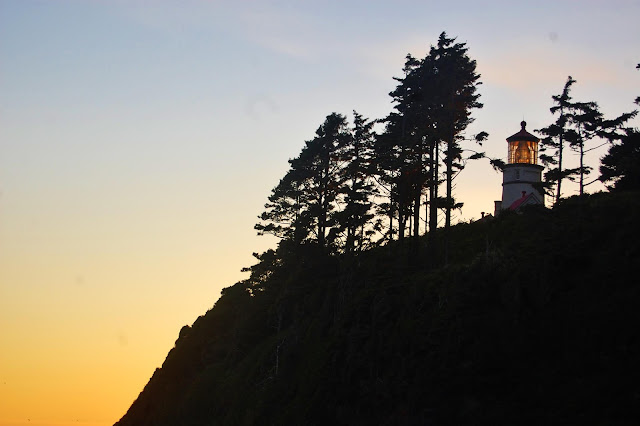 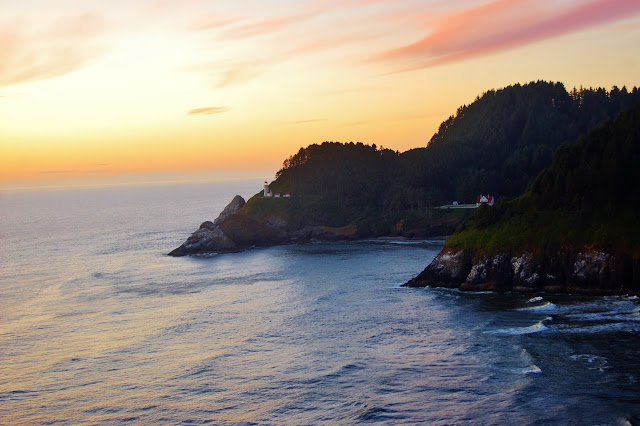 The final stop on our Oregon coast road trip was a quirky one--Darlingtona State Natural Site in Florence. It is a Cobra Lily Reserve--a rare carnivorous plant that grows in bogs. When we went the light was falling but we could walk the boardwalk and could still see some of the flowers. In the photo below you can see the "tongue" where the plant gets it's nickname of Cobra Lily from. Insects become trapped in the plants bulbous hollow head and because of the translucent bulb, can't tell which way is up from down. Eventually spikey hairs inside the lily hold the insect hostage, and then it falls into a liquid pool where it will become food. Gruesome, huh?

One challenge of the Oregon Coast is that all campsites on the coast are paid, and usually booked up in the early season. So if you are going to camp, you either will need to take a detour to forest service land, or stealth. We spent 3 and a half days exploring from Garibaldi to Florence. The misty-magical- Puff the Magic Dragon vibe of the Oregon Coast is so unique, and beautiful. You are able to see so much coastal diversity in a relatively short stretch. Exploring here I saw wildlife, ecology, and geology unlike any other area of the US. The Oregon coast is a sacred place that feels and runs wild, despite the 101 allowing easy access to most areas. Adventure comes naturally here. The Oregon coast is an ultimate road trip location, and we will be back. 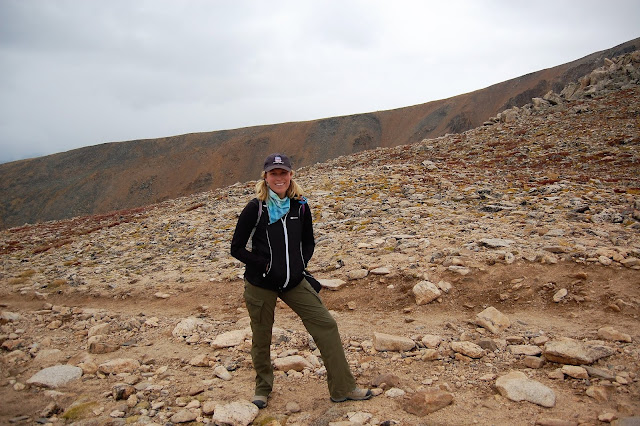